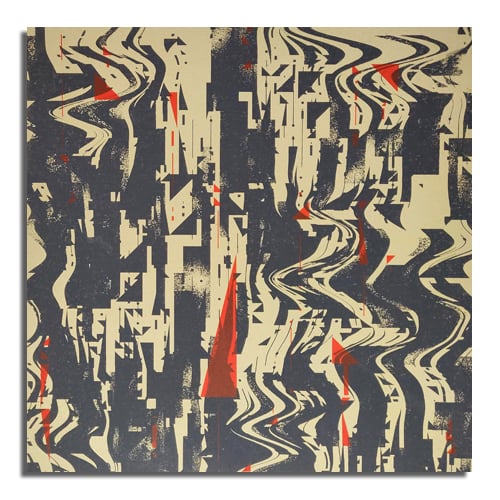 The record consists of four electroacoustic compositions; the product of unfolding and unpredictable generative processes, spread across 38 minutes. This is music that follows its own logic, challenging and confounding the expectations of the listener. Lueur is an unsettling listen, in the literal sense of the word - nothing is allowed to coalesce into a discernable pattern or rhythm, moments of intensity build and then abruptedly shift direction or sink beneath the surface.

An exploration of process as much as tone, texture, and time, Gunnarsson guides the record through a series of ever-changing movements, interweaving dense oscillations and insectoid clatter with subtle tones, waves and crackles of static.

It is a beguiling and disorienting record that rewards close and repeated listening.

Mastered by Erik Nyström, the record is housed in a custom sleeve, screenprinted in two-colours with procedurally-generated artwork by Luke Twyman. Variations of each layer are combined to make 16 unique sleeve designs, with a further screenprint on the inner sleeve/record.

The record is released in an edition of 200, and vinyl purchase comes with a download code.

Bjarni Gunnarsson has previously released the solo works Safn 2006-2009 (2010), Processes & Potentials (2013) and Paths (2016). He is currently based in The Hague, teaching algorithmic composition and computer based music at the Institute of Sonology.

In the words of Gunnarsson “the music is derived from generative processes that often appear directly entangled, that are set in motion and activated while maintaining their own degree of autonomy. It takes a certain time for a process to manifest itself. To express its time-varying qualities.

How it unfolds resembles a certain kind of evolution, a becoming that does not have a clear goal but that is based on a constant renewal and recreation. The title refers to faint, quiet but unsteady light sources.

Brightness that disperses and refracts at different angles and unfolds through a series of connected developments. Processes that continuously produce output implying a ‘tending towards’ characteristic where certain elements endure while others fade away.

The idea is to uncover details, to introduce something very specific that expands and develops through two important layers of temporal experience, a very direct action-oriented perception and the slower experience of a past that folds into the present.”