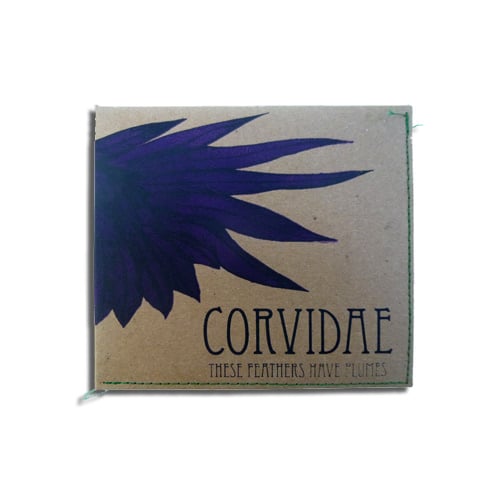 'Corvidae' by These Feathers Have Plumes

Using double bass, glass, accordion, voice and field recordings, Corvidae reveals itself over five extended pieces, casting an otherworldly spell of drone and dissonance. The aptly-titled Portal opens the album, layers of low-frequency reverberations slowly erupting, before a distant voice emerges from the maelstrom. Meticulously constructed, this piece sets the tone for the rest of the disc, shimmering and pulsating drones that beguile and bewitch the listener. Having previously released two sold-out cassettes on the excellent New York tape label Period Tapes, this is the first time music from London-based These Feathers Have Plumes is available on CD.

Available in a beautiful two-colour screenprint in custom Tartaruga packaging, this is produced in a run of just 100 numbered CDs (CDR). Each CD contains a real feather tucked inside the sleeve.